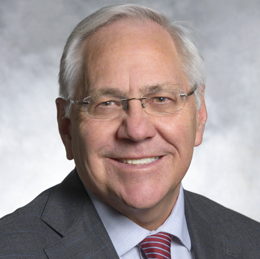 Dr. Jay K. Box was named the second president of the Kentucky Community and Technical College System (KCTCS) on November 19, 2014. He is a community college graduate and has more than 30 years of experience in community college leadership.

Dr. Box has a history of leadership within KCTCS, having served as the president of Hazard Community and Technical College from 2002 – 2007, followed by being named KCTCS vice president. In 2009, he was named chancellor and served in that role until being selected president of the System.

Prior to joining KCTCS, Dr. Box served as a vice president at McLennan Community College in Waco, Texas.

Dr. Box was appointed to the American Workforce Policy Advisory Board by Commerce Secretary Wilbur Ross, who co-chairs the board with Advisor to the President, Ivanka Trump. The board brings together members from diverse backgrounds including educational institutions, state and local governments and CEOs from several major companies such as Apple, Walmart, Visa and Lockheed Martin. Dr. Box is the only community college system president on the council.

He also serves on the national board for Rebuilding America’s Middle Class, the National Council of State Directors of Community Colleges, the Kentucky Business-Education Roundtable and is an ex-officio board member of the Kentucky Chamber of Commerce.

He is a native of Crane, Texas. His wife, Gayle is a retired educator. They have one son.